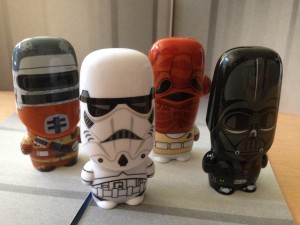 It’s that time of year! Say hello to our four little friends!

These guys will be hiding around Moscone and inside AltConf next week (Tuesday and Wednesday actually). They’re loaded up with all kinds of goodies! Almost $2000 worth of goodies actually. There’s Promo codes, free passes to 360|iDev, and discounts off things.

Wanna find ’em? You’ll have to be fast! Each day we’ll hide 2 drives. We’ll tweet a picture of the drive (so you know what you’re looking for) and a wide area shot of where the drive is, then we’ll post clues.

Any post about the drives will use the #WWDCUSBHunt tag.

Many, Many thanks to those devs and companies that supported the scavenger hunt with copies of their games, apps and services. Whether you find a drive next week or not, check out the links below and support these awesome folks by buying their products.

Can’t wait to see everyone next week! Tickets are moving fast! If you don’t want to chance it on the scavenger hunt, or won’t be in SF next week, grab your ticket now, before they’re gone!